No items found.
Product is not available in this quantity.
August 31, 2020 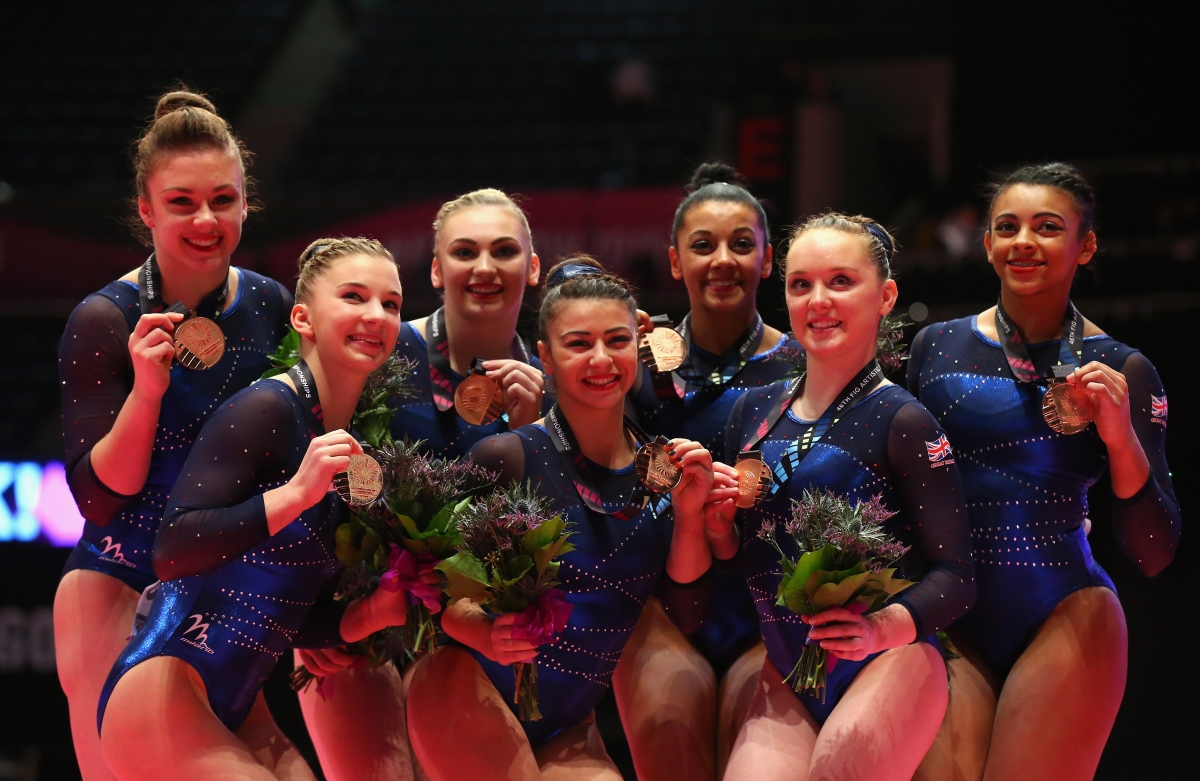 The release of Netflix documentary Athlete A, which exposed details surrounding the sexual abuse committed by doctor Larry Nassar against hundreds of American gymnasts and the culpability of USA Gymnastics for covering up systemic maltreatment of athletes, sparked a movement that has gathered momentum as gymnasts from across the world have united to share their stories and combat the culture of fear that has plagued the sport and silenced gymnasts for far too long.

To understand the horrific reality of this culture, search #GymnastAlliance on Instagram or Twitter. There, you will find personal testimonies from athletes from all gymnastic backgrounds. From former Olympians - such as Lisa Mason and Jennifer Pinches - to elite acrobats, regional-level athletes and, perhaps even more shockingly, recreational gymnasts, all of whom have encountered unethical coaching methods, including intimidation, body-shaming and bullying. Whilst being shouted at, weighed, and forced to repeat skills and conditioning for hours as a punishment when exhausted or injured due to overtraining and the culture of silence, gymnasts asked themselves, ‘what have I done wrong?’. The answer is, usually, ‘nothing’. Complicit governing bodies have allegedly protected people in positions of power by turning a blind eye to allegations, created a reporting system that is intrinsically opaque or that fails to place athletes’ immediate safety first, and generated palpable fear amongst many current gymnasts that speaking out will damage their selection prospects.

‍
The need for positive change within gymnastics is profound and pressing. Some small steps have been made already: several coaches have been suspended or stepped aside whilst investigations take place; the British Athletes Commission established an independent helpline and a QC-led independent review is now underway; meanwhile, longer-term research is being undertaken to investigate and collate gymnasts’ experiences. Media coverage has kept gymnasts’ voices in the public domain and gymnasts continue to speak out and support each other. The time for governing bodies to listen to the voices of their community is long overdue – the athletes, the parents and support networks, and the coaches who have themselves experienced this culture first-hand, all deserve to be heard.


The self-reflection now required from gymnastics organisations offers an opportunity for a top down re-evaluation of how to accept and promote diversity within the sport. The world domination of Simone Biles and the success of other athletes from underrepresented backgrounds, such as US Olympic/World champions Gabrielle Douglas, Laurie Hernandez, Morgan Hurd and Sunisa Lee, alongside the longevity of gymnasts at the heights of their careers (eight-time Olympian Oksana Chusovitina hopes to compete at Tokyo aged 46 and ‘08 Olympian Chellsie Memmel recently announced her comeback) indicates that the sport no longer projects young, white girls as a sole idealised aesthetic. Olympic titles can be won by gymnasts of all heights, builds, ages, ethnicities, and each gymnast’s talents and strengths are unique.

However, testimonies from across the world have highlighted how verbal and emotional abuse can be racist, especially it seems within America’s collegiate system, and homophobic, for example, as GB tumbler Charlie Arbuthnot and ex-gymnast Christian Norman have alleged. Gendered language is often used in a cruel or derogatory way: this insensitivity is the antithesis of inclusivity and is particularly alienating for LGBTQ+ people. Moreover, despite great work especially at grassroots levels, discrimination in disability sport continues. It took a petition in 2019 to successfully reinstate the Disability Masters at the British Championships. British Gymnastics’ current person responsible for equality training and championing diversity is Jane Allen, alleged to be at the core of BG’s climate of fear, who has been forced to temporarily step down from her senior position within UK Sport.

Paradoxically, gymnastics is inherently diverse, and yet lacks diversity in equal measure: it comprises many disciplines including artistic, rhythmic, trampolining, acrobatic, tumbling, DMT, Parkour, aerobics, and teamgym. For many people, their only experience of gymnastics is as a young child learning basic agilities or as a spectator watching what are arguably some of the most beautiful, impressive, expressive and entertaining sports during the Olympics. Yet only the first three gymnastic disciplines are Olympic sports and even then, their coverage in the British media is heavily skewed towards men’s and women’s artistic. This is not due to an imbalance in sporting achievement, as Britain has had long term success in the other disciplines: yet how many people have heard of world champion tumbler Rachael Letsche; double world champion trampolinist Kat Driscoll; rhythmic Olympian Francesca Fox, who recently shared her own abuse story; or arguably one of the most successful sporting families of all time, Edward, Alice and Adam Upcott who all have at least one acrobatics world medal each?

All of these disciplines, for better and for worse, are judged by a panel who determine scores based on artistry, difficulty, execution, accuracy, choreography and synchronicity. The value apportioned to aesthetics, despite its intrinsic subjectivity, is what leads to, in some cases, the relentless and damaging quest for ‘perfection’ which, in turn, can lead to body-shaming, eating disorders, mental health problems and, particularly for young LGBTQ+ people, heightened dysphoria. The emphasis upon performing ‘male’ or ‘female’ skills and routines, as well as the unavoidability of tight-fitting leotards, pushes many away from the sport at an early age. Gymnastics is of course not the only sport to generate these issues – dancing, ballet and figure-skating share similar preoccupations with figure, size and form – and these sports must continue to be scrutinised. Due to their youth and physical immaturity, gymnasts are more vulnerable to the manipulative influence of coaches and decision-makers, to over-training, to emotional or psychological abuse from people in a position of trust. Young gymnasts often identify, first and foremost, as gymnasts – their entire identity becomes linked with their sport, so if their sporting environment is not a supportive one where inclusion of all types of people isn’t actively encouraged, then it can be very difficult, even stifling, for children to understand and embrace all aspects of their identity and gain the confidence that helps them reach their potential.

The positive aspects of gymnastics are manifold and, thankfully, well-celebrated – in all its disciplines, it is a sport that has the undeniable ability to build strong, determined, hard-working, well-rounded, capable, mature, independent and accomplished young people. It can also bring unique physical fitness and joy to adults, as demonstrated by the huge increase in participation in adult gymnastics in recent years, a programme which is renowned for its inclusivity. Many gymnasts now perform skills traditionally associated with their male or female counterparts - such as Christine Lee’s trademark flares - and some competitions take place where women can perform on the pommel horse or rings, and men on the beam, with all competitors displaying their versatility, flexibility and strength. Yet, whilst trans people can participate in domestic competitions, there are still no FIG policies in place to ensure they can compete on the international stage.

There is a new generation of innovative and inspirational coaches who should not be tarred with the same brush as those who have brought misery to their athletes. Nevertheless, new protocols within gyms are needed to safeguard against the types of abusive behaviour faced by gymnasts behind closed doors. The age at which female gymnasts enter the ‘senior’ ranks (currently set at 16) should be raised. Gymnasts and coaches alike should be represented, supported, and encouraged to be the best they can be, without needing a documentary about a sexual abuser to be the stimulus for international change. We need a sport where gymnasts are treated as human beings with strengths and weaknesses, rights and personalities, not as ‘pieces of meat’. Every child and adult that steps into a gym should have a positive, challenging, fulfilling experience.


If any of the issues discussed in this article have affected you and you would like support, you can contact the confidential British Athletes Commission/NSPCC helpline on 0800 056 0566 from 8am-10pm weekdays or 9am-6pm weekends. You can share your story anonymously via Instagram accounts such as ‘gymnast4change’ or ‘moominwhisky’, or contribute to the Whyte Review here.